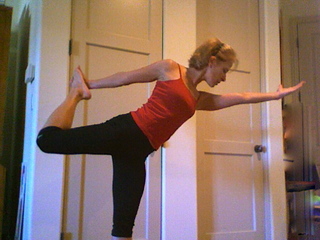 Now that I live in the Pacific Northwest, I plan my week around a class called, Body Flow. This yoga, pilates, t’ai chi mix is not the tree-hugging overreaction of an Easterner gone native. It’s medically indicated. I haven’t found a better way to offset the foggy, wet gloom of a life lived almost entirely in gray and green.

Other than getting out of town.

On a recent trip to Los Angeles, I was hoping to slip into my Body Flow class as seamlessly as others find gyms, YMCAs or Twelve Step meetings. With none to be found, I visited the website for Bikram Choudhury’s Yoga College of India. Also known as Bikram Yoga, Hot Yoga, and Yoga to the Stars. People rave about it back in Portland. The testimonials on its website are the internet equivalent of the crutches at Lourdes, vowing a cure for almost every major disease. Why not check out the mothership?

One Saturday, I drove Grandpa’s old caddy up La Cienega and handed over my keys to a total stranger. No receipt for a car with platinum pistons. But what the heck! This is a spiritual place.

Bikram regulars arrive with mats, bottled water, and goodwill. We enter a room that’s long and low, with acoustic tiles on the ceiling, and mirrors spanning its vast, front wall. The carpet is the color of mango and the room is heated to 105 degrees. I’m standing under a vent that could poach an egg faster than you can say cholesterol.

From her perch, the teacher surveys the room. Her glossy black hair is pulled into a tight ponytail. She stands straight as a ballerina, alert as a raven. Beak like red laquer. Absolutely beautiful.

“Anybody new?” she asks. Several of us raise our hands. “You weight lifter?” I shook my head. “You jogger?” Nope.

Enough of this chit chat. We all know what’s coming. 26 positions in 90 minutes. Designed and copyrighted by Bikram Choudhury.

We went through them twice. Each one promised a medical miracle. “Anyone on medication for kidney?” the teacher asked. A few people looked up. “No need medication with this pose!”

“Colitis? Gas?” she said, scanning the room. “No more with this position!”

Then she saw me exhale. “No exhale!” She looked alarmed. “Only twenty percent exhale!”

“You!” she pointed to a tall, elderly man in the back who looked about to pass out. “Your son bring you?” The son smiled and nodded.

About 62 minutes into the class – I think I was in dandayamana dhanyurasana -- that’s standing bow pose -- I felt a tap on my foot. “Hold hand in ‘mama give me money’ position,” the teacher demonstrated. “Then grab foot.”

In the front row, a woman screamed. “A moth,” she cried.

Teacher should know. Bikram is the first Yoga franchise and it’s hugely successful. Bodyflow is part of a larger business, too - called Body Training Systems. It offers Bodypump, Bodyattack and other classes to health clubs everywhere.

When teacher isn’t looking, I do my own pose. It’s called: “Mama get-me-outta-here.”

Do all these classes, spiritual or otherwise, come down to a kind of brand loyalty? I want my Bodyflow class the way others crave a
Big Mac. No matter what town I’m in.

Here’s what Bikram Choudury has to say about his vision for yoga. "If you want a 2002 Cadillac Eldorado," he told the New York Times, "it doesn't matter which dealership you go to — you'll get exactly the same car."

How crass. How inspired. How uniquely American.