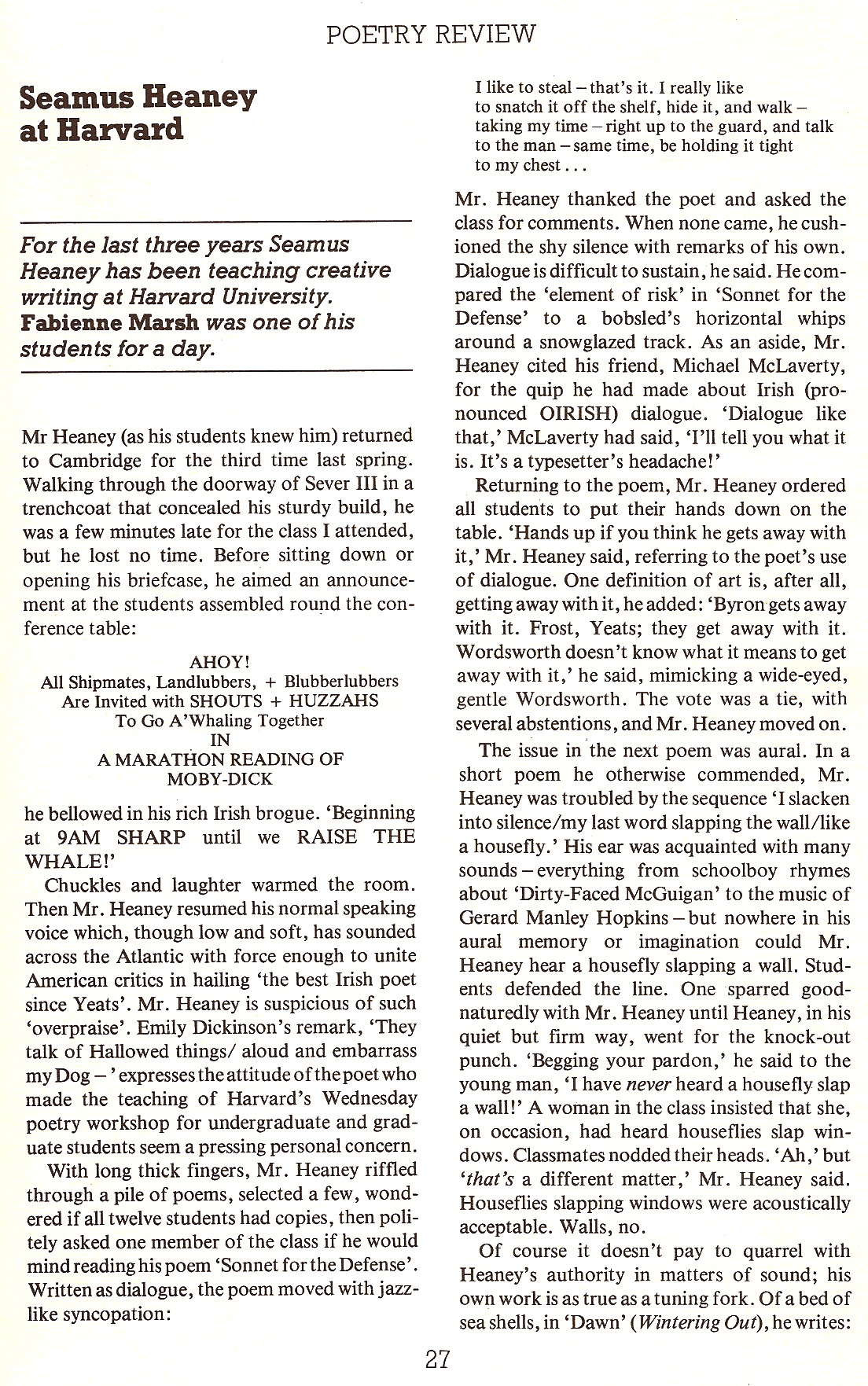 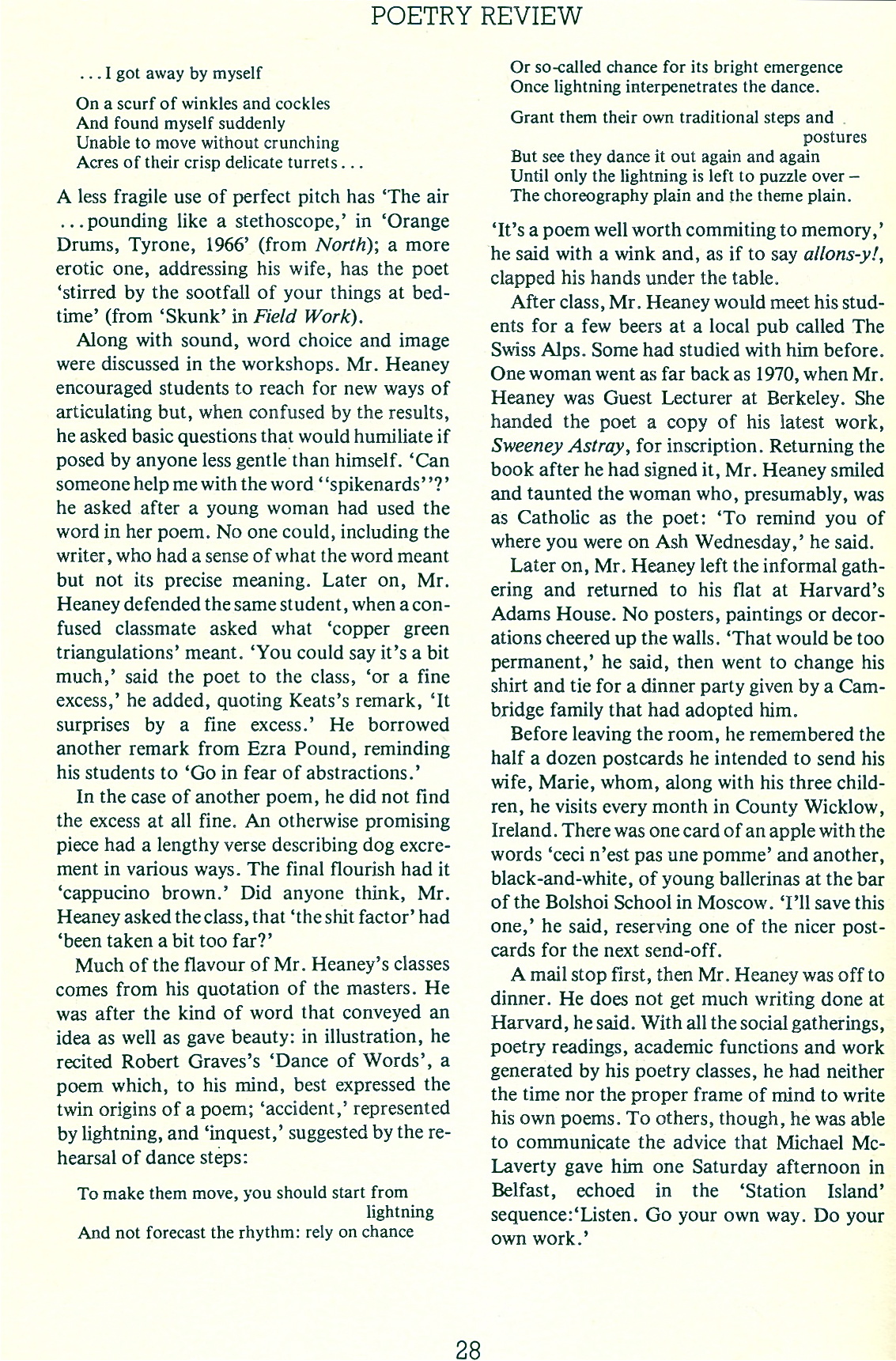 Mr. Heaney, as his students knew him, returned to Cambridge for the third time last spring. Walking through the doorway of Sever 111 in a trenchcoat that concealed his sturdy build, he was a few minutes late for the class I attended, but he lost no time. Before sitting down or opening his briefcase, he aimed an announcement at the students assembled round the conference table:

AHOY! All Shipmates, Landlubbers, + Blubberlubbers Are Invited with SHOUTS + HUZZAHS To Go A'Whaling Together IN A MARATHON READING OF MOBY-DICK

he bellowed in his rich Irish brogue. 'Beginning at 9AM SHARP until we RAISE THE WHALE!'

Chuckles and laughter warmed the room. Then Mr. Heaney resumed his normal speaking voice which, though low and soft, has sounded across the Atlantic with force enough to unite American critics in hailing 'the best Irish poet since Yeats'. Mr. Heaney is suspicious of such 'overpraise'. Emily Dickinson's remark, 'They talk of hallowed things/aloud and embarrass my Dog -' expresses the attitude of the poet who made the teaching of Harvard's Wednesday poetry workshop for undergraduate and graduate students seem a pressing personal concern.

With long thick fingers, Mr. Heaney riffled through a pile of poems, selected a few, wondered if all twelve students had copies, then politely asked one member of the class if he would mind reading his poem, "Sonnet for the Defense'. Written as dialogue, the poem moved with jazz-like syncopation:

I like to steal - that's it. I really like/to snatch it off the shelf, hide it, and walk -/taking my time-right up to the guard, and talk to the man - same time, be holding it tight/to my chest...

Mr. Heaney thanked the poet and asked the class for comments. When none came, he cushioned the shy silence with remarks of his own. Dialogue is difficult to sustain, he said. He compared the 'element of risk' in 'Sonnet for the Defense' to a bobsleds horizontal whips around a snowglazed track. As an aside, Mr. Heaney cited his friend, Michael Mc Laverty, for the quip he had made about Irish (pronounced OIRISH) dialogue. "Dialogue like that,' McLaverty had said, 'I'll tell you what it is. It's a typesetter's headache!'

The issue in the next poem was aural. In a short poem he otherwise commended, Mr. Heaney was troubled by the sequence 'I slacken into silence/my last word slapping the wall/ like a housefly.' His ear was acquainted with many sounds, everything from schoolboy rhymes about 'Dirty-Faced McGuigan' to the music of Gerard Manley Hopkins - but nowhere in his aural memory or imagination could Mr. Heaney hear a housefly slapping a wall. Students defended the line. One sparred goodnaturedly with Mr. Heaney until Heaney, in his quiet, firm way, went for the knock-out punch. 'Begging your pardon,' he said to the young man, 'I have never heard a housefly slap a wall!' A woman in the class insisted that she, on occasion, had heard houseflies slap windows. Classmates nodded their heads. 'Ah, but that's a different matter,' Mr. Heaney said. Houseflies slapping windows were acoustically acceptable. Walls, no.

Of course, it doesn't pay to quarrel with Heaney's authority on matters of sound; his own work is as true as a tuning fork. Of a bed of seashells, in 'Dawn' (Wintering Out), he writes: I got away by myself/On a scurf of winkles and cockles/And I found myself suddenly/Unable to move without crunching/Acres of their crisp, delicate turrets...

Along with sound, word choice and image were discussed in the workshops. Mr. Heaney encouraged students to reach for new ways of articulating but, when confused by the results, he asked basic questions that would humiliate if posed by anyone less gentle than himself. 'Can someone help me with "spikenards?"' he asked after a young woman had used the word in her poem. No one could, including the writer, who had a sense of what the word meant but not its precise meaning. Later on, Mr. Heaney defended the same student, when a confused classmate asked what 'copper green triangulations' meant. 'You could say it's a bit much,' said the poet to the class, 'or a fine excess,' he added, quoting Keat's remark, 'It surprises by a fine excess.' He borrowed another remark from Ezra Pound, reminding his students to 'Go in fear of abstractions.'

In another poem, he did not find the excess at all fine. An otherwise promising piece had a lengthy verse describing dog excrement in various ways. The final flourish had it 'cappucino brown.' Did anyone think, Mr. Heaney asked the class, that 'the shit factor' had 'been taken a bit too far?'

Much of the flavour of Mr. Heaney's classes comes from his quotation of the masters. He was after the kind of word that that conveyed an idea as well as gave beauty: in illustration, he recited Robert Graves's 'Dance of Words', a poem which, to his mind, best expressed the twin origins of a poem; 'accident,' represented by lightning, and 'inquest,' suggested by the rehearsal of dance steps: To make them move, your should start from lightning/And not forecast the rhythm: rely on chance/Or so-called chance for its bright emergence/Once lightning interpenetrates the dance/Grant them their own traditional steps and postures/But see they dance it out again and again/Until only the lightning is left to puzzle over - The choreography plain and the theme plain.

'It's a poem well worth committing to memory,' he said with a wink and, as if to say, allons-y!, clapped his hands under the table.

After class, Mr. Heaney would meet his students for a few beers at a local pub called The Swiss Alps. Some had studied with him before. One woman went as far back as 1970, when Mr. Heaney was a Guest Lecturer at Berkeley. She handed the poet a copy of his latest work, Sweeney Astray, for inscription. Returning the book after he had signed it, Mr. Heaney smiled and taunted the woman who, presumably, was as Catholic as the poet: 'To remind you of where you were on Ash Wednesday,' he said.

Later on, Mr. Heaney left the informal gathering and returned to his flat at Harvard's Adams House. No posters, paintings or decorations cheered up the walls. 'That would be too permanent,' he said, then went to change his shirt and tie for a dinner party given by a Cambridge family that had adopted him.

Before leaving the room, he remembered the half a dozen postcards he intended to sent his wife, Marie, whom, along with his three children, he visits every month in County Wicklow, Ireland. There was one card of an apple with the words 'ceci n'est pas une pomme' and another, black-and-white, of young ballerinas at the barre of the Bolshoi School in Moscow. 'I'll save this one,' he said, reserving one of the nicer postcards for the next send-off.

A mail stop first, then Mr. Heaney was off to dinner. He does not get much writing done at Harvard, he said. With all the social gatherings, poetry readings, academic functions and work generated by his poetry classes, he had neither the time nor the proper frame of mind to write his own poems. To others, though, he was able to communicate the advice that Michael McLaverty gave him one Saturday afternoon in Belfast, echoed in the 'Station Island' sequence: 'Listen. Go your own way. Do your own work."