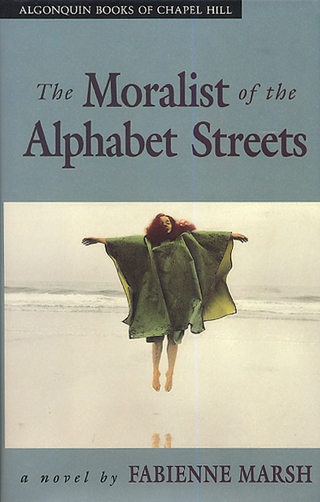 buy The Moralist of the Alphabet Streets

The Moralist of the Alphabet Streets

July in Mainsfield brought so many storms that grown men and women were counting mississippis between the flashes of lightning and the cracks of thunder. It was buggier than ever and there were more tiger-lilies, more black-eyed susans, and, after the rain, battalions of slugs and deeper bouquets of air. Everything alive seemed to assert itself, especially in our pond. Rude sounds filled our backyard with a chorus of croaks and belches, and one species of frog sang in diphthongs, much like a Jew's harp.

Marsh "exhibits the same sophistication and wit that marked her 1988 debut." —The New York Times

"sylphlike, winningly punctilious… Marsh writes so gracefully and has an acute (if inwardly spiraling) sense of humor."— Ralph Novak in People

"a New Yorker who writes like a tar heel and thus gives us this funny novel filled with exuberant tragic characters."— Library Journal

"Like Frankie (in Carson McCuller's The Member of the Wedding) Marsh's Meredith views the world in a wistful, touchingly idiosyncratic way, while always standing apart from the action she so beautifully renders." — Meg Wolitzer in the Chicago Tribune

“Outstanding…This is a book of exceptional warmth and grace. It is entirely engaging in all parts and lingers with the resonance of its deeper messages, presented to us like a platter of fresh fruit on a humid, storm-lowering day.” — Small Press Review

“packs a punch that is wry and witty as well as, yes, uplifting.” — Metroland (Albany)

“Marsh’s prose is so direct and unfussy that its powerful emotional wallop surprises.” — City Pages (Minneapolis)

“Fabienne Marsh is a skilled and compassionate writer, who has created complex characters who looks with more than usual perceptiveness into the convoluted nature of family and neighborhood relationships.” — Rocky Mountain News (Colorado)

“In a warm, richly drawn coming-of-age story, a delightfully wry observant 18-year-old with a fondness for frankness and affection-tinged cynicism learns about love and mortality during one important summer.”
— Booklist, Editor’s Choice

"Marsh has written a wonderful book. There's a little wisdom in every sentence and laughter on every page. I cried until I laughed."
—Michael Lewis, author of Liar's Poker